The Raleigh Sports Club is in its 55th year of providing weekly luncheons where 150 or more gather each week to hear fascinating stories from riveting speakers representing all parts of the college and professional athletic scene. The Club also recognizes an outstanding high school student-athlete each week, enjoys camaraderie with sports minded friends, partakes of a delicious buffet lunch, tests skills at picking winners of weekly sporting events, and occasionally goes home with a free meal voucher or door prize. Established in 1964 with 12 charter members, the Club has grown to fill Bradley Hall at Highland United Methodist Church, 1901 Ridge Road. 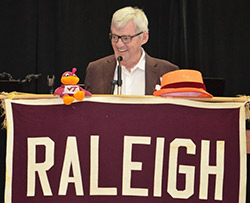 At the Raleigh Sports Club we introduce members to a wide and very impressive variety of speakers to our weekly meetings. On any given week, you could hear from Frank Beamer, the Hall of Fame former football coach of the Virginia Tech Hokies (shown above), the head coach of an NCAA champion basketball team, a professional referee, or the receiver who became famous for making the winning catch.

Student Athlete Of The Week 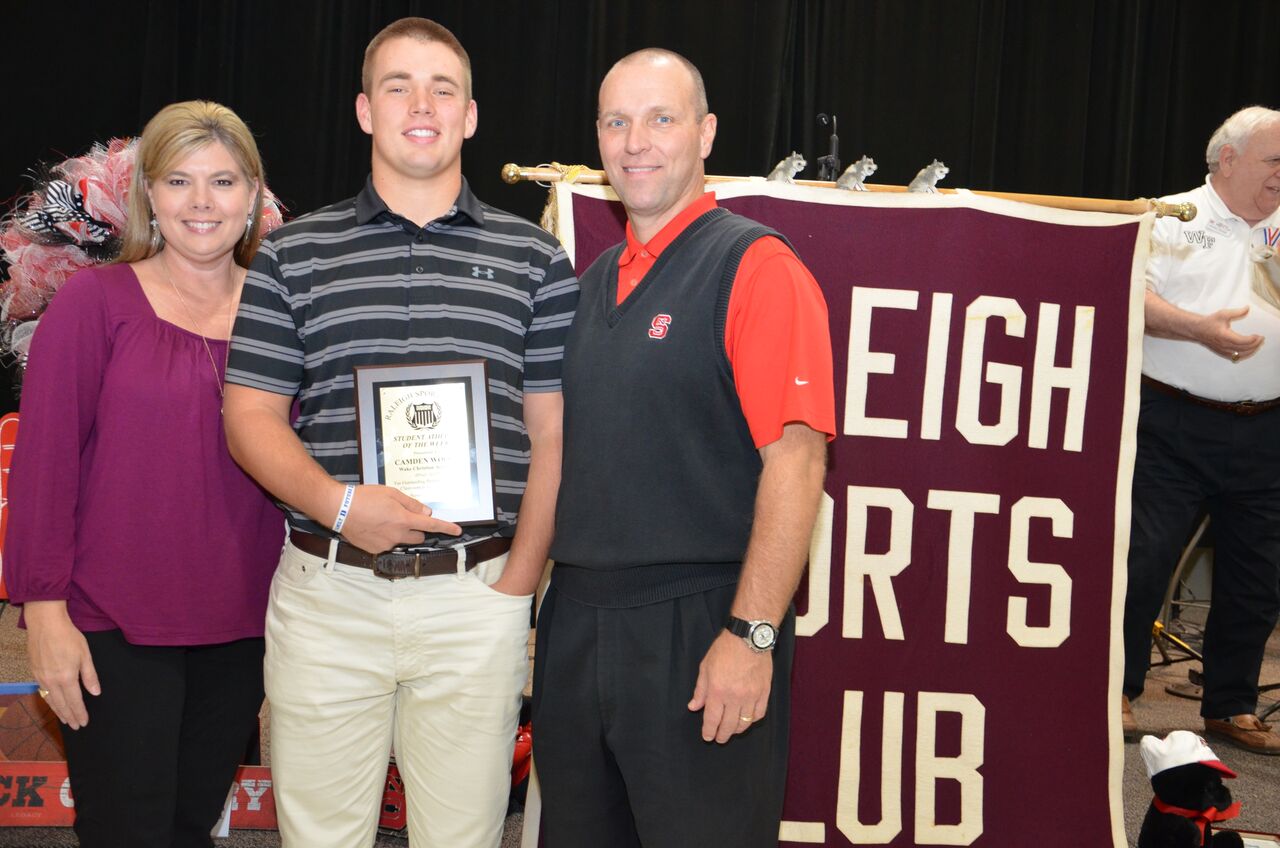 The RSC honors local high school student athletes for their achievements on the field, in the classroom and in the community.

The RSC has a wonderful southern style buffet. Long lines form to get some of the best food and hear some of the most prominent sports speakers in the country. Get there early to get a good seat.

THANKS TO MORT'S TROPHIES AND AWARDS

For many years Mort's of Raleigh, NC has been donating the custom engraved plaque that is presented to the Student-Athlete who is honored each week by the Raleigh Sports Club. We appreciate Mort's gracious contributions to recognizing the amazing achievements of our local high school youth.

You can follow Raleigh Sports Club on Facebook to learn about upcoming speakers, see stories and photos from recent meetings, share your comments and suggestions, and see the comments from other members. Please check in regularly and LIKE our Facebook page. If you see an upcoming meeting that would be enjoyed by others, please SHARE the notice with your Facebook friends. 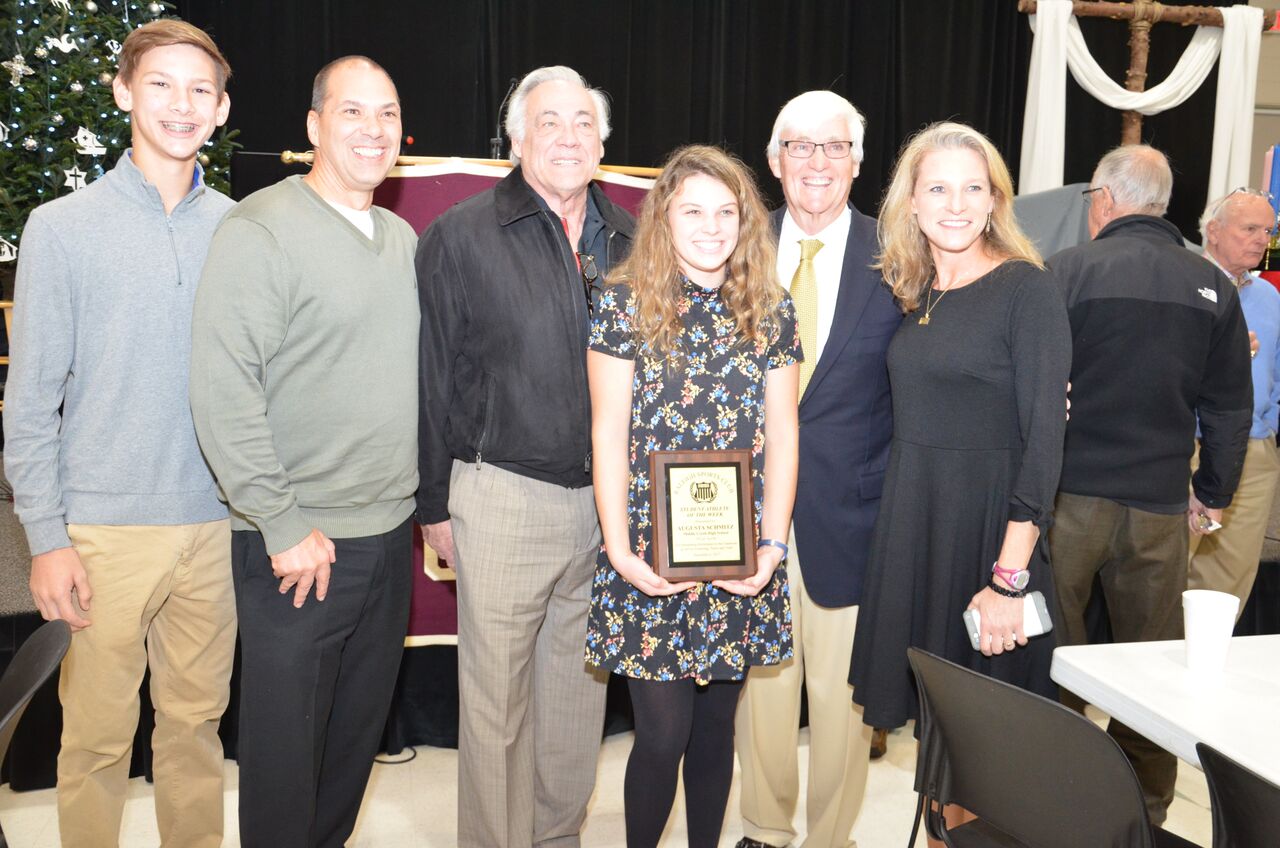 About the Raleigh Sports Club:

Our meetings are held in Bradley Hall inside Highland Church, 1901 Ridge Road at the intersection of Lake Boone Trail, just inside the Raleigh Beltline. Buffet lines open at 11:30am and the meeting runs from Noon until 1:00pm on Wednesdays. Meetings are typically held every week (except Thanksgiving, Christmas and New Year's holidays) from early September through late March.

Best regards,
The Raleigh Sports Club Officers and Board of Directors

An eagerly anticipated annual event for the Raleigh Sports Club, a local organization of 240 members which recently celebrated its 56th anniversary, is the awarding of four $2000 scholarships to graduating Wake County high school student-athletes. The honorees are nominated by their high school coach or Athletic Director and are not eligible if also earning an athletic grant-in-aid from their chosen college. Additionally, one Wake County high school coach is named Raleigh Sports Club "Coach of the Year" and is presented a $1000 award for service, achievement, and for the impact made on the lives of local student-athletes. These awards typically take place at the end-of -season banquet which was to be held on April 1 at the North Ridge Country Club. Like most everything else this spring, the banquet was cancelled in compliance with recommended government guidelines.

Claudia Dare was instrumental in helping Garner begin the school's lacrosse program, and she helped recruit many of her teammates. Claudia was captain this year for both the lacrosse and the tennis team. Her lacrosse coach, Ronnie Lee, had this to say, "Claudia has the unique ability to read the field which allows her to accurately anticipate the ball's movement with shot assist or in providing solid defense. Claudia's speed and tenacity means she will be exactly where she needs to be during play. Her most endearing quality as a player is her ability to keep the team's spirit high." As an outstanding student, Claudia is ranked 3rd in her class with a GPA of 4.61. She is President of the Beta Club, a member of FCA and Student Services Advisory Council, and serves as Student Council Student Relations Coordinator. Claudia will be attending UNC this fall to study Math and Statistics.

Tommy Petruccione is a dedicated multi-sport athlete who served as his school's basketball co-captain and played three years of varsity lacrosse. Tommy's favorite sports memory was hitting the winning last second shot against Wakefield's conference archrival this year! His coach, Garrett Stevens, said of Tommy, "He's positive, respectful, studious, motivated and responsible. He's a talented and smart basketball player who has done a tremendous job of dedicating himself to become better each year. He is someone you look forward to coaching and being around because of his positive outlook and fun-loving nature." Tommy is also an excellent scholar with a 4.375 GPA, membership in the National Honor Society, National Math Honor Society, BETA Club and as Vice President of the Neuse River Conservation Club. He will soon decide whether to study Applied Mathematics/Business at UNC or NCSU.

Cameron Tate, a senior at Heritage High School, plays football and is an outstanding student. Cam, as he is called by friends and family, began his football career as the team equipment manager. His coach, Wallace Clark, said, "Cam was one day holding a practice dummy for tackling practice. After taking a particularly hard hit, Cam declared that he was no longer going to be 'a dummy holder' . . . either on or off the field." For the next three years he was a standout offensive lineman. Cam's declaration of intent carried over to the classroom where he is a member of the National Honor Society, the Math Honor Society, holds a 4.23 GPA and studied in 6 AP classes prior to this year. At school he is also a member of FCA and part of Heritage's Peer Tutoring program. Away from school, Cam is active in his church Youth Group, is the leader of Slam Jam, a 3-on-3 basketball tournament for underprivileged children, and has participated in multiple mission trips with his Church. In his "spare" time Cam works at the Heritage Golf Course. He plans to attend Appalachian State University.

Shelby Woods has been an integral part of the success of the Cary Christian School Knights basketball program for four years. She has played on the Women's Varsity team since her freshman year and was captain this year. Shelby earned all-conference the last three years, received all-state recognition this year, and was named the EPIC conference player of the year. Her Coach, Shelly Holmes, had this to say, "Shelby has a great work ethic and leads in all areas while on the floor in a game." As an excellent student, Shelby has maintained a GPA of 4.67. She is a Student Ambassador and a member of FCA. Shelby will be attending either NC State or UNC Charlotte in the fall of 2020. She plans to become a physical therapist.

Raleigh Sports Coach of the Year Paul Dinkenor, boys and girls soccer coach at Leesville Road High School, is respected by his own school as well as by those against whom he has competed. His nomination came, in fact, from the Athletic Director of different Wake County high school. Paul developed his soccer skills as a youth in England. He received degrees in history at Cambridge University and has taught French, Latin, Humanities, English Literature, plus American and World History during his 40 year career as a teacher. Paul's coaching career began in 1987, and he has been at Leesville since 1993. In 33 years of coaching, Paul's teams have won 5 state titles, 15 conference titles, and 7 conference tournament titles. Paul has twice been named North Carolina high school coach of the year and is a member of the NC Soccer Coaches Association Field of Honor. Coach Dinkenor holds his players accountable to high standards for sportsmanship, for playing the game the right way while respecting opponents, and for achieving in academics. He is an excellent coach but an even better person who is passionate about shaping his players into all around good people.

In addition to these annual awards, the Raleigh Sports Club proudly recognizes and honors a deserving local high school student-athlete at each of its 27 weekly buffet luncheons, where members also hear an enlightening and entertaining talk - followed by Q&A - from a well-known leader of the athletics community. For more information or to consider membership, please visit www.raleighsportsclub.org.

We will begin the 2020-21 season on Wednesday, September 2, 2020 at the Highland Methodist Church. We will look forward to meeting again, continuing the long-standing traditions of the Raleigh Sports Club. Please take care of yourselves, your friends, and those you love.