The Raleigh Sports Club is in its 59th year of providing delicious Wednesday luncheons where 150 or more gather weekly to hear fascinating stories from riveting speakers representing all parts of the college and professional athletic scene. 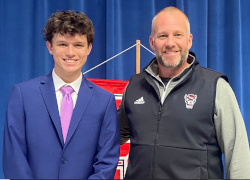 At the Raleigh Sports Club we introduce members to a wide and very impressive variety of speakers to our weekly meetings. On any given week, you could hear from Dave Doeren, head football coach for the Wolfpack, or other local active college coaches, athletes, or athletic directors, or speakers from the world of professional sports, or even Hall of Fame athletes or coaches who represent a fascinating range of teams  each with cherished memories and great stories to tell.

Student Athlete Of The Week 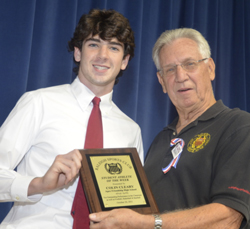 Colin Cleary of Apex Friendship High School was honored October 20, 2021 as an outstanding student and as a superb athlete in football, basketball, and baseball. The weekly award was presented by Rick Ulasewich of the Club Board of Directors.

The RSC honors local high school student athletes for their achievements on the field, in the classroom and in the community.

The RSC has a wonderful southern style buffet. Long lines form to get some of the best food and hear some of the most prominent sports speakers in the country. Get there early to get a good seat.

THANKS TO MORT'S TROPHIES AND AWARDS

For many years Mort's of Raleigh, NC has been donating the custom engraved plaque that is presented to the Student-Athlete who is honored each week by the Raleigh Sports Club. We appreciate Mort's gracious contributions to recognizing the amazing achievements of our local high school youth.

You can follow Raleigh Sports Club on Facebook to learn about upcoming speakers, see stories and photos from recent meetings, share your comments and suggestions, and see the comments from other members. Please check in regularly and LIKE our Facebook page. If you see an upcoming meeting that would be enjoyed by others, please SHARE the notice with your Facebook friends.

Our first two meetings for this new season show that everyone is ready for sports talk and camaraderie! Attendance is up, entertaining football is back, our speakers and student-athletes have been terrific, and the food is delicious as always. Below are a few outtakes from week one.

Our speaker on September 7 was Joe Giglio, WRALSportsFan journalist, who co-hosts a daily sports radio broadcast, The OG, with Joe Ovies on 99.9 The Fan. Joe shared many insightful sports stories and answered a flock of questions from our members. Joe prefaced his remarks with a recounting of the touching battles his family has faced with his wife's cancer and the car accident which injured his two teen aged sons last fall. Thankfully, all three are doing well now.

The upcoming speaker for September 14 is Robert Jones, former ECU and Dallas Cowboys linebacker. Robert started more than 120 NFL games after becoming an immediate fixture for the Dallas Cowboys at the height of their success in the early 1990s. The Cowboys' first-round draft pick out of East Carolina in 1992 moved straight into the starting lineup at linebacker. He helped teams coached by Jimmy Johnson and Barry Switzer win three Super Bowls in his first four seasons. Now Robert has sons playing in the NFL.

Our speaker for September 21 will be Lin Dawson, outstanding football player and scholar. Lin played at NC State in early 80's and went on to a ten year NFL career with the New England Patriots as a tight end. He played in one super bowl and has now earned his Doctorate and works as the Dean of Exercise Science at St. Augustine's College in Raleigh.

Future RSC speakers will be publicized in our weekly newsletter which is emailed to members. You may check the Speakers Tab of this website for a summary of last season's speakers along with a listing of names of the some of the famous speakers who have graced our stage during the past 58 years.