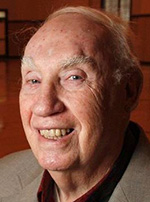 Bob was a long time member of the Raleigh Sports Club and he served for several years as our chaplain. What most of us never knew about Bob was that he set a HS basketball record for the state of NC in 1950 which still stands today. The News & Observer posted a nice article by Luke Decock about Bob and his record, which we will repeat here in case you missed it.

One February night more than 70 years ago, Bob Poole set a basketball record that would outlive him. Then he watched the entire state change around him while that record still stood. Poole, who died Tuesday at 90, became almost as conflicted as he was proud of the 67 points he scored for Clayton High back in 1950, a mark that has endured the challenge of countless generational basketball stars in North Carolina. "I don't go out broadcasting it, but they've heard of it from somewhere," Poole said in a 2010 interview. "Especially the basketball fans. They see Phil Ford and David Thompson and Michael Jordan and see little ol' me and say, 'How in the world did you get there?'" After that game, when his teammates fed him the ball over and over again against a hopelessly overmatched opponent before Poole even realized what was going on, he would say later, Poole became a Baptist minister and spent the rest of his life in service. After playing basketball at Furman - where he was on the court when Frank Selvy set the NCAA record with 100 points against Newberry - and serving in the Army, he felt a spiritual calling and enrolled at Southeast Baptist Theological Seminary in Wake Forest. He spent three decades as a Baptist minister in Elizabeth City before retiring to Raleigh, where he remained active in the church, helping out wherever he was needed. "When we first went there, it was a pretty small little church out on (Highway) 17," his son, Robert Poole, Jr., said Thursday. "Now it's got a big family life center and a gym. It has really expanded. He just devoted his whole life to his church and his family and his community." The record followed him everywhere, for the rest of his life, but as far as Poole was concerned, his lifelong legacy was in the church, the congregants to whom he ministered, the joy he shared officiating weddings and the grief he honored at their funerals, and his wife of 67 years and their four children and nine grandchildren. "I think he told me he made 10,000 visits to the hospital in his career," his son said. "He had a card where he'd write down every day what he did. Lots of hospital visits. Lots of funerals. He officiated countless weddings. He did a lot of things in the community, all kinds of things. Lots of stuff for church basketball and that kind of stuff, getting kids involved in things and trying to keep them busy. Using the church in a way to try to keep them busy, using that as a tool of his ministry." Poole's is a story of modern North Carolina, of basketball excellence and changing times. The tiny school he set the record against, Corinth-Holders, was folded into Smithfield-Selma amid a round of rural school consolidation in 1969. The farms that surrounded it once grew tobacco and cotton; many years later when they were plowed under for subdivisions, Johnston County opened a new high school in the area, resurrecting the old name. Unlike the school, the NCHSAA record has endured the test of time. It has been challenged - JamesOn Curry, the state's all-time career leader, scored 65 for Eastern Alamance in 2004 and Cam Hamilton scored 63 for Vance (now Chambers) in 2017 - but never met or exceeded, not by Curry nor Chris Paul nor John Lucas nor Donald Williams nor Phil Ford, all of whom posted high scores among the top 30 in state history. It's quite remarkable, given the number of outstanding basketball players the state has produced, that the record has stood for so long. It's also hard to imagine any team or any coach allowing it to be broken in this day and age; no one would want to be on the receiving end of it. That's a realization that came to Poole later in life. In that 2010 interview, Poole said he was almost embarrassed by the record. He was a college-bound star on a powerful Clayton team; Corinth-Holders barely had enough students to field a basketball team. A new state record of 53 points had been set against Corinth-Holders earlier that season. Poole said his teammates, aware of that, took it upon themselves to feed him for three-quarters of their points in an 88-27 win. "I never talked to anybody after the game," Poole said. "Today I probably would have written them a letter of apology. You don't like to be made fun of or humiliated, whatever the word is. I think about that a whole lot more than I used to, because it can be done to you, too. At the time, I didn't really know what was going on. Now, when I reflect back over the years, maybe that wasn't the best thing to have done." That kind of perspective is a gift, and Poole spent the rest of his life sharing it with others.