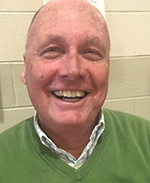 We've all gotten to enjoy the friendly smile and warm greeting we receive each week from our Treasurer, Gary O'Neill, as he hands us our plate and pick sheet. I'll bet you may have already figured out that our most international board member was born in Canada, eh? But, did you know that, at birth, Gary held dual citizenship for Canada and Ireland? Or that he earned a management degree in Belgium before working for a the Swedish firm where he met his Dutch wife, Maria? Gary's global responsibilities with the Axel Johnson Group led him to work with fascinating people and diverse cultures in Africa, Asia, Europe, the Middle East, and South America. Eventually Gary's work brought him to the U.S., where he and Maria have now resided for 35 years, have become American citizens, and eventually made their way to Raleigh five years ago.

In his youth Gary played baseball and hockey. After switching to forward he led his high school hockey team in scoring. As a sports fan, Gary was thrilled to be in attendance in 1969 at the first major league baseball game ever played in Canada - the Montreal Expos beat the St. Louis Cardinals, 8-7. He now enjoys attending Wolfpack football and basketball games and gets Maria to join him for Hurricanes Hockey games in exchange for accompanying her to favored cultural activities like the Symphony and Art Museum.

Gary left the corporate world in 1990 to found his own consulting business for metal and wood based products. He was proud to have developed solutions for companies like the NY Transit Authority, Disney Parks and Resorts, and Cadillac motors. Gary retired from all of his business activities last year and is now happily supporting the ambitions of his family of 3 children and 2 grandchildren. Any spare time available permits his attention to hobbies such as amateur radio, electronics, motorsports, model cars and travel.

Gary has been a member of the Raleigh Sports Club for 5 years and has been a board member or officer for the past four. He has enjoyed learning about the amazing collegiate sports of our area and has relished the opportunity to shake hands with some of the many sporting legends who have come to speak to us.