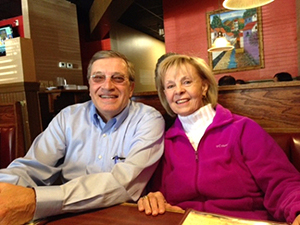 It is my pleasure to introduce the "Featured Couple" of the week - Pete and Judy Benda. They have been happily married for 54 years, and they are a fascinating couple! Pete currently serves on our Board of Directors and is a long-time member, since 1992. Judy, has attended frequently with Pete over the years, and she has been a member herself for the past five years.

Last year, their granddaughter, Grace Countie, was our Student-Athlete of the week. Grace added three Junior National championships to her resume this past March and is swimming as a freshman at UNC this fall. But Grace was not the first to be honored as our student athlete. In 2016, granddaughter Gentry Benda was our weekly Student-Athlete. She has played volleyball at Mount Olive University, and is now transferring to Appalachian State. Three years before that, granddaughter Gabby Benda was our Student-Athlete. Gabby led her Wakefield HS team to the 2014 NC state championship, and has since graduated from Georgia Tech in June after playing four years of college volleyball. She is currently playing professional volleyball in Sweden.

Pete and Judy have three children: Scott, Jill and Brian. Scott Benda, their eldest son, played football, basketball and baseball (for Coach Mike Fox, a frequent RSC speaker) at Millbrook High School. He developed skills in volleyball while studying Electrical Engineering at NCSU and continued playing the sport after college. His two daughters are the recipients of his volleyball training that has served them so well.

Their younger two children were state champion swimmers at Millbrook HS. During their time there back in the 1980s, Judy stepped in to fill a void and served as the Swim Team Coach for two years. Practices started at 5 AM, and she then would go to her day job as a fulltime English teacher at Millbrook.

Daughter Jill went on to become an All American swimmer at UNC where she met her husband Matt, also on the swim team. Son Brian swam at USC (the other Carolina) where he met his wife, Marci; you guessed it, on the swim team. Not surprisingly, the five children between them are all competitive swimmers.

Where did all this begin? Pete and Judy met at the University of Illinois. Probably not far from the pool. Pete learned to swim at age four and competed in high school and college. Judy was very athletic and was raised in a sports minded family, but she didn't have a lot of opportunities to compete on an athletic team in those days. She performed with the Water Ballet Club in high school and spent a lot of time in her school's swimming pool.

Judy's father, Russell Ahearn, is enshrined in the Illinois Basketball Hall of Fame. He coached the Hebron Green Giants to the Illinois State high school basketball championship in 1952. Hebron, a school of 98 students (with 45 boys) defeated Quincy, a school of over 2000 students, in overtime, to win the state championship.

Pete proposed to Judy three months before graduation in 1964, and they were married right out of college. Pete started a career with IBM that spanned 44 years and took him all over the world, including living for a year in Singapore. While working for IBM he was an adjunct professor for two Nashville universities, Fisk and Vanderbilt. After 'retiring' from IBM, he has worked as a consultant, substitute high school teacher, served on boards, and honed his skills as an amateur painter of landscapes and portraits. Judy sold real estate after leaving her teaching career and now she enjoys singing in their church choir.

Pete and Judy remain active today. They bike, walk and swim regularly, follow the athletic pursuits of their grandchildren, and enjoy Wednesday luncheons with friends at the Sports Club. Pete diplomatically states that he enjoys pulling for NC State, UNC, and Duke. Judy, on the other hand, states emphatically that she is a Tar Heel.