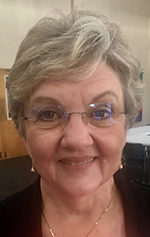 Carol Pope has been a sports fan as long as she can remember. Growing up in High Point she played basketball, baseball and touch football with the neighborhood boys. She turned her energies to cheering for them when she got to high school. Cheerleading was the perfect activity for an encourager like Carol who "strives to always help others make their dreams come true."

Carol's father was a truck driver who disliked his job. He advised her to get an education and find a job she would love. And, that's just what she did! After graduating from High Point College she moved to Raleigh and began her teaching career at Broughton high school.

It was then, in the early 1970s, that Carol first learned about the Raleigh Sports Club. Our club was still in its infancy. She was told about it by her uncle, Charlie Bryant, a longtime Sports Club member, the Executive Secretary of the Wolfpack Club, and by 2006 honored by the NC Sports Hall of Fame for his own athletic accomplishments. He thrilled her with stories about the many amazing athletes, coaches and sporting figures he had gotten to know, and hear from, at our Wednesday luncheons. But Carol was much too busy back then with teaching English, directing the school's dramatic plays, and being the cheerleading advisor to be able to attend herself. Joining the Sports Club for her would have to wait . . . and it did!

After 10 years at Broughton, Carol returned to school earning a Masters at NC State and then a Doctorate in Education at the University of Virginia in 1983. She taught in Virginia and Texas before returning to NCSU in 1987 as an Assistant Professor of English. During her 28 years at State Carol excelled in classroom teaching, held leadership roles, wrote journal articles, books and textbooks, and edited the publications written by many others. For a career of distinguished service she was recognized by her students, peers and administration with numerous awards and citations before retiring in 2015 as Professor Emerita.

During this active career she also met and married her husband, Andy, who provided her with a ready-made family of two sons . . . which has since grown to include four grandchildren. Andy is a pretty big sports fan too and they've been long time season ticket holders for State basketball games. But Carol points out that she's still the one in their family who gets first dibs on the Sports section each morning. They also enjoy cheering for football, baseball or other sporting teams in person or at home watching them on TV. In the springtime they like to go to Phoenix with a selection of preseason major league baseball tickets already purchased. And yes, they watched all of the recent World Series . . . except for the end of that 18 inning marathon third game that went until 3 AM!

We should point out that Carol has many interests in addition to her family, work and sports. She loves to read, go to movies and attend Broadway plays. She and Andy are enthusiastic travelers who explore both new spots and return to favored places like Florence, Paris, and the Baltic. Carol sings in her church choir and she and Andy are accomplished ballroom dancers which they mostly do for fun and exercise, but have on occasion entered into a competition.

Now, what do you think Carol did when she retired from teaching three years ago? Well, she finally became a member and regular attendee at the Raleigh Sports Club! A year ago she was encouraged by her friend and our Club Vice President, Bob Jones, to understudy him and help with lining up our weekly speakers. When Bob relocated to Charlotte last winter, Carol did a great job of filling in for him with our speaker introductions on Wednesdays. That led to her being elected as our new Club Vice President last spring to succeed Bob. Now, can you imagine the shock she experienced during her August vacation with Andy in Ireland when she learned that she was going to be our new Club president? That news came via an overseas telephone call from member Lou Pucillo. Her reply was (quote), "Why, I've never even been to a board meeting yet!"

What a steep learning curve and untold hours of intense effort she has endured during the past few months . . . all on our behalf! But, with her professional and graceful guidance Carol stepped up to the challenge and has our Club sailing smoothly and on course now into its 55th season. Oh yes, the Raleigh Sports Club is running strong with 241 members, now also including Carol's husband, Andy. As the new manager of our team, Carol has inspired and encouraged her officers and board members to cover all the bases, keep our eye on the ball, give 110%, and knock it out of the park yet again!